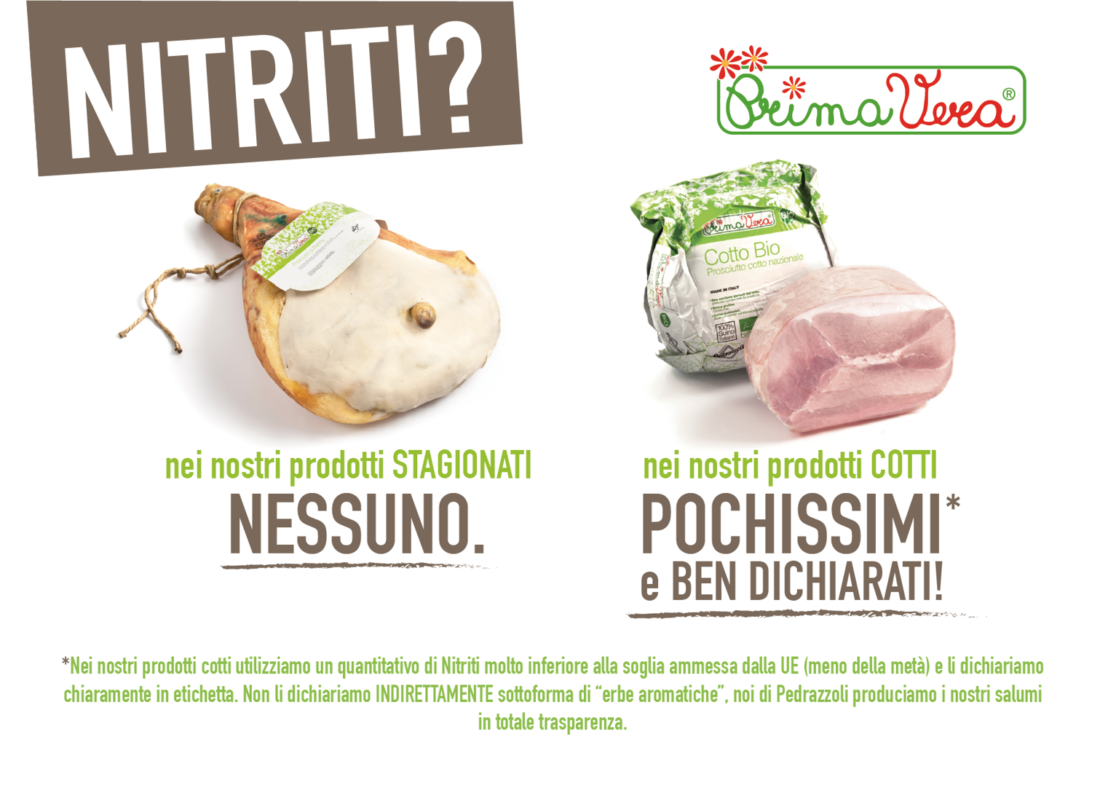 NITRATE & NITRITE IN COLD CUTS: WHAT ARE THEY AND WHAT DO WE USE FOR? IN THE CASE OF ORGANIC COLD CUTS, ARE THERE DIFFERENCES? LET’S EXPLAIN!

When we speak about cold cuts, we discuss about the presence of preservatives such as nitrates and nitrites, but also other ingredients like “dextrose” or “sucrose”, that belong to the category of “sugars”. But is this true? How much? In the organic cold cuts? Let’s try to make this things clear! Firstly we have to explain, what the NITRATES and the NITRITES are.

THE NITRATES are substances, that we naturally found in animal feed, vegetables and drinking water. Food, that, in nature, contains the greatest amount of nitrates, are the chard and celery, followed by the spinach and turnips. Different categories of nitrates are used in the food industry as preservatives of category E, colorants and antioxidants for different foods, especially in processed meat (cold cuts, würstel, canned meat), marinated fish and sometimes even in dairy products. They are marked in the labels with codes E251 and E252. Their use consists in the fact that nitrates are nowadays the only known substances that contrast the germination of the spores of Clostridium botulin, one of the most dangerous forms of deadly food infection, which can only be prevented. The nitrates are harmless, but in particular conditions (heat, bacteria, long-life) can be converted into nitrites and then in nitrosamine. Foods that naturally contains nitrates has also vitamin C, which limits the transformation into nitrosamines. THE NITRITES are preservatives identified by the E249 and E250 acronyms. They are considered potentially dangerous substances, because in acidic environment (for example in the stomach), they became nitrous acid, that cause (originate, shape) the nitrosamines, a compounds considered carcinogenic. Also nitrites bind to hemoglobin, oxidize it to methemoglobin, reducing, in this way, the transport of oxygen to the tissues. LET’S ANALYSE THE COLD CUTS Why are substances as nitrates / nitrites used? There are many reasons:

A decree published in the Official Gazette in June 28th 2016 (Decree 26th May 2016 – Changes to the decree 21th September 2005 concerning the regulation of the production and sale of meat products. (16A04808) -GU General Series 149 of 6-28-2016) entered into force September 26th 2016, introduces some changes in the production and in sales of cold cuts products in Italy.
Among the changes, the decree, which is only an Italian disposition, provides another important clarification: the use of ingredients, which contains nitrates, nitrites or both, in order to obtain a preservative effect, is configured as the use of food additives and does not allow to boast the absence of preservatives. Basing on the dispositions of the European Commission in the note in January 12th 2007 “The use of the extract of spinach with a high content of nitrate in meat products”, becomes the deliberate use of a food additive, if the extract of spinach or of other vegetable is used with the purpose to preserve the finished product. This is an important step forward for the consumer protection, in order to avoid the purchase of a product, that should be without nitrites and nitrates, because of the declaration “without preservative”, but that in reality contains them (extract spinach indeed),
hidden by other words (for example: “natural flavors” and / or “natural additives”, “aromatic
spices”).

LET’S SEE WHICH ARE THE DIFFERENCES IN THE FIELD OF ORGANIC COLD CUTS FOR WHAT CONCERNES THE USE OF PRESERVATIVES.
In order to ensure, even in organic meats, a proper conservation of the product, its microbial and bacteriological health and therefore not to risk the health of the consumer, especially in products like cooked ham and mortadella, that not being seasoned (matured), are more exposed to the attack of microbes and bacteria), the addition of preservatives, nitrates / nitrites, is therefore allowed, but at a lower content than the conventional products: we speak about 80 mg per kg of product in organic cold cuts with a maximum of 50 mg per kg of residual allowed, in comparison with 150 mg per kg of product, and without specifying the indication of the residual of conventional cold cuts. A huge (big, great) difference! Without considering, that the raw material, like pork meat from the organic breeding farms, has already big differences: the pigs must grow on an organic plot of land, fed with organic feed, and, when needed, treated with phytotherapy treatments.

FINAL THOUGHTS:
The use of preservatives / additives in organic meats is strictly limited compared to the normal use in the cold cuts, obtained with the conventional method; this restriction concernes the composition, the input quantity and the method of use. So, despite having to comply with the maximum levels allowed by the organic law, the organic producers of cold cuts can choose to use a fewer quantity of preservatives than those provided, of course without affecting the health of the product and its proper (preservation). That is the reason why, even when we buy an organic product, we can evaluate the differences: by reading and by comparing the labels, by informing about the producer and the origin of the meat, in order to be sure that we are making the best choice.

PEDRAZZOLI AND PRESERVATIVES
We are convinced that it is coherent to produce organic meats without the use of the preservatives.
Pedrazzoli since 1996 has completely removed the use of nitrites / nitrates in the seasoned products of the PrimaVera line (bio line). In cooked products ( for example mortadella and ham), instead, we still use a small amount of nitrite. We strongly believe that the health of a product should be guaranteed to the customer, until the consumption and, nowadays, there are no substances like nitrites that allow to conserve the products. We consider a duty to the consumer to indicate ,on the label, if there are inclusion of preservatives, even if it happens indirectly through substances, that contains preservatives.
We can also ensure that the use of nitrites in PrimaVera line products is far lower than the EU directives of bio and consequently the residue in the finished product, which is on average around 18mg per kg (in the organic regulation it is allowed up to 50mg of residue).