Pioneers in organic farming in Italy, we launched our Linea Primavera Bio organic range in 1996. Over the years we built up experience and knowledge. For us, as well as providing products guaranteed free from gluten, milk flour and preservatives, working organically is a company philosophy; it begins with the way we raise our pigs and is defined by certain key concepts.

True pioneers in the field, we launched our organic Linea Primavera Bio range in 1996. Over the years we built up experience and knowledge. For us, as well as providing products guaranteed free from gluten, milk flour and preservatives, working organically is a company philosophy; it begins with the way we raise our pigs and is defined by certain key concepts.

The first is free-range farming

The first is free-range farming: the only farming method which truly respects the life of the animal and the space it needs to live (a pre-determined amount of organic land is allotted per animal).

The second is making the quality of our animal feed

The second is making the quality of our animal feed a top priority: our pigs are fed exclusively on organic food made with certified raw materials, which come mostly from our own organic crops.

The third is animal welfare above all else

The third is animal welfare above all else: we guarantee our pigs a free life with the minimum of stress; if they fall ill, we treat them with natural and homeopathic remedies. 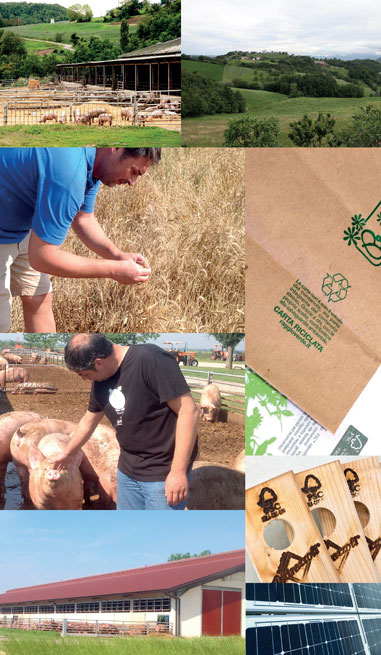 If you would like to find out more about our passion for organic farming, visit the blog celebrating 20 years of Primavera Bio!
visit passione.bio!
1996

The launch of our Primavera Bio organic range

items and counting in the organic Primavera Bio range

Leaders in organic deli meat production for over 20 years with the Primavera Bio range.

Launched over 20 years ago, Primavera is a line of organic meats and deli meats manufactured using natural methods: from rearing the pig to slaughtering it, and from processing the meat to maturing it. Embodying the ethical spirit of our entire philosophy, the range is based on: organic products free from preservatives, gluten and milk flours; free-range farming techniques; and a fully integrated supply chain. Our commitment to excellence, the environment and protecting our consumers in terms of health and food safety, are the main ingredients in Pedrazzoli’s recipe for success, and the fundamental principles behind the new Linea Primavera.

Discover all the products in the range in the Linea Primavera Bio section of our website.
GO TO THE PRIMAVERA BIO CATALOGUE

Over to the experto

In 2016, to celebrate 20 years of the PrimaVera Bio range, Salumificio Pedrazzoli opened a series of important discussions on the development of the organic sector, particularly with regard to meat and deli meat products. A number of collaborations arose from this project; one of the most important of these was with Prof. Bordoni from the University of Bologna’s Food and Agricultural Science and Technology Department. In fact, Bordoni’s studies (of which you can also read articles on our organic blog: www.passione.bio) reveal – for example – how recent research has demonstrated important differences in the nutritional value of conventional meat and organic meat. Here is an extract from the article published on our passione.bio blog in January 2017.

A recent publication has, for the first time, provided a scientific basis for the differences between conventional and organic meat in terms of nutritional value. So what are these differences and why are they so important?
Recently, the number of consumers buying organic products has risen exponentially. Over the last 20 years, there has been a growing interest in organic animal products as well as plant-based products.
The consumer’s decision to buy organic is surely based on an increased focus on the safety of the products, but also on the concept of ethical and sustainable supply chains from start to finish.
Consumers also show great appreciation for the protection of animal welfare on the part of producers; they also believe, and rightly so, that such products, particularly if processed, will be safer. This increased safety is related both to the farming methods used (which exclude the unregulated use of pharmaceuticals, for example) and the processing methods, which limit the number of preservatives and additives used, ensuring that these are lower than in conventional products and possibly, with some manufacturers, even entirely absent.
Many consumers also believe that organic animal products have a higher nutritional value and contribute to a healthier more balanced diet as a result. In fact, the scientific data up to now on the superior nutritional value of organic products, and animal products in particular, has been controversial and fragmented.
In this regard, a review was recently published of all the scientific studies published up until 2014 (see reference below). This important review enables us to get to the bottom of the differences between conventional and organic products, at least in terms of certain nutrients. In particular, the authors of this review were able to carry out a thorough statistical analysis on the fat content of the two types of meat.
Overall, organic meat had more polyunsaturated fat than standard meat. When examining different kinds of meat individually, it emerged that these general differences are particularly accentuated in chicken and pork.
These differences are particularly important from a nutritional perspective. Indeed, of all the recommendations for eating a healthy, balanced diet, reducing the amount of saturated fat and increasing polyunsaturated fat intake seem to be among the most important, particularly for preventing cardiovascular diseases.
The authors of the review calculate that, based on average meat consumption in Europe, substituting conventional meat with organic meat could increase polyunsaturated fatty acid intake by 17%.
The benefit would be even greater with regard to one particular category of polyunsaturated fats: omega-3. The potential of these fatty acids for preventing diseases is well-recognised today, and there are even omega-3-enriched foods on the market. However, our intake of omega-3 remains relatively low. This is linked to the fact that, on average, we consume very little fish, the main dietary source of omega-3, and this is why we are advised to eat fish at least once or twice a week. Substituting conventional meat with organic meat could lead to a 22% increase in omega-3 polyunsaturates.

Therefore, the recent publication of this review has, for the first time, provided a scientific basis for the difference between conventional and organic meat in terms of nutritional value, and suggested that these differences, at least with regard to fats, favour the consumption of organic meat.
The review also confirmed a tendency for organic meat to yield a higher mineral content. However, due to a high degree of inconsistency between the various products, combined with a low number of studies, it is difficult to draw conclusions. The review, however, does provide us with one initial positive insight.
The difference between organic and conventional meat can be explained by the animal feeds used; however, the way the animals are farmed (free range) also seems to contribute to organic meat’s significant advantage in terms of quality. Even in organic farming, there are differences in terms of feed and lifestyle (e.g. the number of hours spent in the open), and so there are also large differences between different types of meat and different producers; animal species is also a factor. For example, for monogastric animals such as chickens or pigs, free grazing seems to have a greater positive effect on polyunsaturated fatty acid content.
Research is also currently being carried out on the difference between conventional and organic meat in terms of certain so-called “bio-active” compounds, substances which, although not nutrients, seem to have a positive effect on human health. These include conjugated linoleic acid, carnitine and carnosine.
In conclusion, therefore: although research and studies on the nutritional differences between conventional and organic meat are still underway, the current state of scientific knowledge seems to suggest that organic meat has more nutritional value than non-organic meat, at least in regard to certain nutrients.
To find out more:
Średnicka-Tober D et al. (2016) Composition differences between organic and conventional meat: a systematic literature review and meta-analysis. British Journal of Nutrition 115(6): 994-1011.

THE DIFFERENCE BETWEEN “CONVENTIONAL” AND ORGANIC DELI MEAT EXPLAINED FOR CHILDREN…