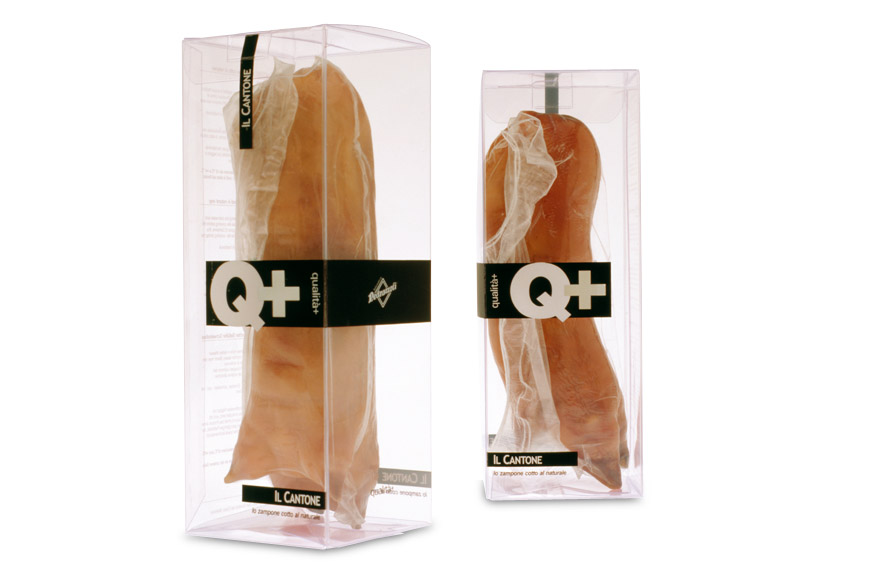 More on our organic Cantone _ The Zampone from Salumificio Pedrazzoli:
The history of Zampone blends easily with legend. The origins of Zampone date back to 1511, a date confirmed by many including the great Modenese scholar Marco Cesare Nannini. That year, Pope Julius II’s troops were laying siege to Mirandola, in Modena, which was faithful to France. Towards the end of the siege, the population of Mirandola was beginning to starve. All they had left were their pigs. Not slaughtering them was out of the question: they would have been a gift to the enemy, who were now close to seizing the city. But butchering them? Once slaughtered, pork had to be eaten immediately. What was the solution? The answer came to a cook from Mirandola who said: “We slaughter the animals and stuff their hollowed-out trotters with the leanest meat”.

Cantone, a zampone made using the traditional Modenese recipe from the finest raw materials, is boiled unpackaged, directly in water, and then packaged afterwards. This process protects the product from any impurities, and guarantees consumers that what they are buying is indeed what they will be consuming.The zampone is then pasteurised but not sterilised, leaving all the qualities of the fresh product intact.This product unites tradition and innovation. It was born out of the desire to meet the modern consumer’s needs for convenient products and, although pre-cooked, it has a decidedly unique flavour Boil the sealed zampone in its clear packaging for around an hour. Remove from packaging before eating.Unlike other varieties of zampone, when Cantone is boiled, no liquid is lost during the process, and so there is no weight loss of the product.Slice the zampone and serve with traditional side dishes.