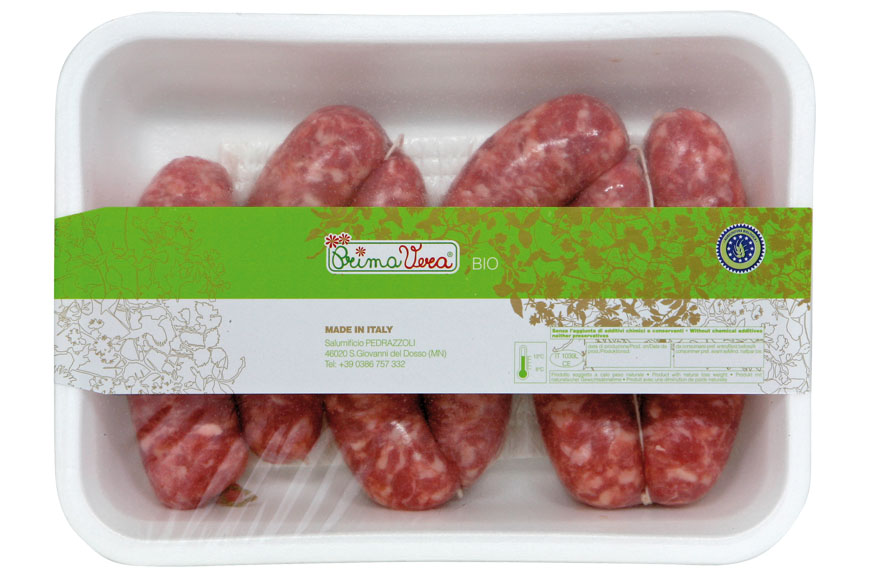 More on Salsiccia Bio from Salumificio Pedrazzoli’s Linea Primavera organic range:
The first historical record of the practice of filling pork casings with meat mixed with spices and salt was made by the Roman historian Marcus Terentius Varro Lucullus, who attributed its invention and practice to the Lucanians. However, according to a spurious and very recent Lombard tradition, it was actually invented by the Lombard queen Theodelinda, believed to have invented the sausage and given its recipe to the inhabitants of Monza as a gift. Many cities claim to be the birthplace of this product; however, according reputable sources, its origins can indeed be traced back to the Lucanians.
Our Salsiccia Bio organic sausage is nothing more than classic salamella mantovana (Mantuan sausage), but made with meat produced according to organic livestock farming principles. Unlike other sausages, our organic sausages are only made with quality meat, specifically with cuts of ham and pancetta.This mixture is then seasoned with salt, pepper and garlic, and stuffed into a thin casing.
PAIRINGS: 100/150 g of salamella mantovana measures around 15 cm in length; it is excellent sliced in half and cooked on the grill. Pair with a red wine like Lambrusco Mantovano.