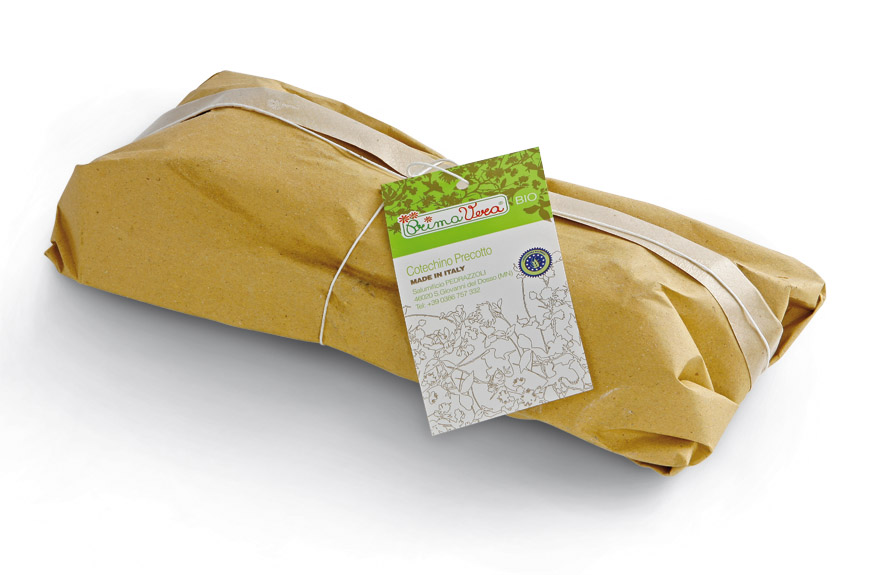 More on pre-cooked Zampone Precotto Bio wrapped in yellow paper from Salumificio Pedrazzoli’s Linea Primavera organic range:
The history of Zampone blends easily with legend. 1511 is the agreed date for the origin of Zampone. That year, Pope Julius II’s troops were laying siege to Mirandola, in Modena, which was faithful to France.Towards the end of the siege, the population of Mirandola was beginning to starve. All they had left were their pigs. Not slaughtering them was out of the question: they would have been a gift to the enemy, who were now close to seizing the city. But butchering them? Once slaughtered, pork had to be eaten immediately. What was the solution? The answer came to a cook from Mirandola who said: “We slaughter the animals and stuff their hollowed-out trotters with the leanest meat”.Zampone is a typical deli meat product from the provinces of Modena and Bologna in Emilia, although it has become well known throughout the country.

PAIRINGS: Zampone is a specialty with a distinctive, intense and spicy flavour; it is consumed all over Italy, particularly during the winter months. It is also a typical component of the traditional Italian New Year’s feast, when it is eaten with lentils. Well-known accompaniments include other types of pulses, such as bean stew and lentils. During the Renaissance, it was even served with zabaione (a liquor-flavoured Italian custard). These days it is eaten with finely mashed potatoes or salted spinach with a little Terra di Bari olive oil and cheese. As for drinks, it goes perfectly with sparkling red wines like Lambrusco, a sweet, naturally fermented wine which is vivacious and fruity and lingers on the palate. Formats available: 1000 g approx. – 900 g – fresh or pre-cooked, heat treated in an autoclave at a minimum temperature of 115°C, wrapped in yellow paper like it used to be by traditional deli meat butchers.